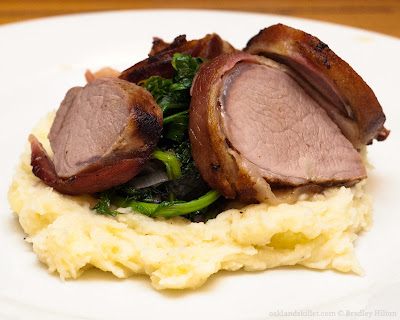 Last June some friends of mine took me to dinner at a very nice restaurant in Sonoma, the El Dorado Kitchen. The dinner was a tasting to determine what would be on the menu for their July wedding. It also happened to be my birthday. The rule for ordering was we had to choose something from the restaurant's menu that the kitchen would be able to prepare for the wedding. Plenty of choices. We ordered Lamb Chops, Salmon, Halibut, and Bacon Wrapped Pork Tenderloin. While I am a huge fan of pork, especially the tenderloin, it is a risky choice for wedding food. I gather there are quite a few folks who steer clear of pork. Religious reasons aside, who would have problems with tender pork wrapped in more delicious pork? The EDK pork tenderloin was, without a doubt, the best pork tenderloin I have ever had. (Thank you, and congratulations S&B)

I was so impressed with the EDK tenderloin that I had to try and make my own. This is my version inspired by the El Dorado Kitchen.

Pork Tenderloin is to Pork as Filet Mignon is to Beef. In fact they are essentially the same muscle in their respective animals. The meat is very tender because it doesn't do much work while the animal is alive. Like Filet Mignon this muscle isn't particularly flavorful by itself. However, pork tenderloin takes on added flavors very well. It does have a tendency to dry out since it is a lean muscle. This recipe is pretty forgiving though. Brining the tenderloin serves two purposes, first it adds a lot of flavor to the meat and second it helps ensure that the meat doesn't dry out. Cooking the tenderloin wrapped with what is essentially a layer of fat will further ensure that the meat stays moist. So even if you make a mistake or aren't paying attention and let the pork cook to medium-well (160º F) it won't dry out.

Brine
If you are going to pay good money for a good cut like tenderloin then take the time to brine.
Boil 1 1/2 cups of water then turn off the heat. Add the salt and stir until it is dissolved. Allow it to cool somewhat then add the herbs and peppercorns while the water is still hot. Allow the herbs to steep for 10 minutes in the hot water. Pour the hot water into a large container or bowl and add the ice, remaining water, and apple juice. Place the tenderloins in the brine making sure they are completely submerged. Cover and place in the refrigerator for 6 - 10 hours.

Prepare the Pork
Remove the tenderloins form the brine and dry them thoroughly with a towel. Discard the brine. The brine smells good, but it tastes really salty and is probably unsafe to drink. I can't imagine why you would want to save it. Cut slits 1/2 inch apart one side of each tenderloin and stuff the slits with the garlic slivers. Season the pork with pepper. No salt, bacon has plenty. While the meat is still at refrigerator temperature heat a heavy ovenproof skillet, preferably cast iron, over medium high heat. When the pan is hot add the olive oil and brown the tenderloins on all sides. About 2 minutes per side (8 minutes total). If the meat isn't browned after 2 minutes turn up the heat. You do not really want to start cooking the pork yet. Just get the outside brown. Remove the pork from the pan and set on a plate.
Lay the bacon strips side by side to the width of one loin so they slightly overlap. Roll the bacon around the loin and cut off any excess so that the bacon only slightly overlaps end to end as well. Tie the bacon to the loin with butchers twine.

Heat the same pan used to brown the loin over medium high heat. Brown the warped loin again on all sides for about 1 minute per side. Remove loin from pan and set on a plate. Drain the fat from the pan.
Put the pork back in the pan and place in the preheated oven. Bake for approximately 20 - 25 minutes until the pork reaches an internal temperature of 140º F. Remove the pan from the oven and wrap the tenderloins in foil immediately. Allow the pork to rest for 10 minutes or until the internal temperature reaches 145º F.

Notes
Slab bacon is harder and harder to find these days. If you can get it then have the butcher slice it thinner than normal. When I made this last weekend I couldn't find slab bacon, so I used good quality Niman Ranch bacon which is quite thick. The dish was of course good, but I would have really liked a thinner layer of bacon. I find the thick bacon a little overpowering. A thinner slice would still provide plenty of flavor and a nice crust. One added benefit from wrapping the tenderloin with bacon is it becomes much more difficult to dry out the tenderloin.

I like using a mix of red and gold potatoes because, when cooked, they have different textures. The gold potatoes will probably break down a bit faster than the red potatoes. You'll end up with some chunks and some smooth creamy potatoes. Just the way I like them. Boiling the garlic mutes the flavor and prevents the garlic from overpowering the dish, but you will still taste the garlic.

Greens are easy and there are a million recipes for them on the internet. Just pick a recipe that you don't think will be offensive to the pork or potatoes and it'll be fine. I used broccoli rabe and leaks.