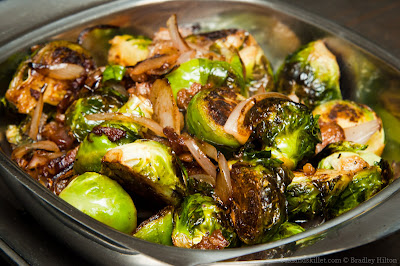 Brussels sprouts are good. You can quote me on that. Growing up as a kid my mom would make Brussels Sprouts a few times a year when they were in season. She usually steamed them and served them with a heavy squeeze of lemon. I will admit that I still like them cooked this way, but steamed Brussels Sprouts can be less than enthralling next to the other roasted flavors they would often be served with this time of year.

They way the salty and smokey flavors in the bacon play with the bitterness of the Brussels Sprouts is about as complementary as food gets. I add the shallots for a bit of sweetness when they caramelize. Finally finished with a squeeze of lemon which helps cut the greasy flavors from the bacon fat and offset the bitterness in the Brussels sprout.

With Thanksgiving Day arriving in less than a week I thought I would do a trial run of my Brussels Sprouts with Bacon and Shallots.


Ingredients
Place the cut bacon in a cold heavy skillet large enough to hold all the Brussels sprouts. Bring the skillet up to medium heat slowly. Bringing the skillet up to temperature slowly will render out more fat from the bacon. Cook the bacon over medium heat until it browns. Remove the bacon from the pan and set aside. Drain all but 1 1/2 - 2 tablespoons of the rendered bacon fat, so the bottome is covered. Return the pan to heat. Place the Brussels sprouts cut side down in the pan. Cook the Brussels sprouts uncovered for about 10 minutes and check to see that they are starting to brown a bit on the cut side. Once some browning has been achieved add half of the wine and cover with a lid or foil.
Continue to cook covered cut side down for 5 minutes. Remove the cover and add the shallots. Stir the Brussels sprouts so they are laying in the pan in random orientations and the shallots have contact with the bottom of the pan. Saute for 8 - 10 more minutes string occasionally to prevent the shallots from burning.
Add the bacon and stir so it is distributed evenly. Add the remaining wine and cover for 5 more minutes. Remove the cover and turn off the heat. Add the lemon juice and salt and pepper to taste. Serve immediately with wedges of lemon.

Notes
Don't feel like you have to stick to the cooking times strictly. The goal here is to get some browning on the Brussels sprouts and caramelize shallots. Covering and uncovering helps steam the Brussels sprouts with allowing them to become soggy or sitting in a lot of liquid which would be bitter. You are going to have to employ a little judgement so as not to overcook the Brussels sprouts. I have been cooking this recipe for many years and I don't think I have done it exactly the same way twice and usually employ my judgment for how long to cook at each step.