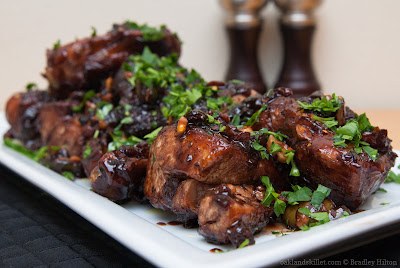 I found this recipe in one of my favorite cookbooks, "Molto Italiano: 327 Simple Italian Recipes to Cook at Home" by Mario Batali. If you've ever heard me talk about food you probably know that I idolize Mario. Seriously, the guy knows his food and facts. He used to have a cooking show on the Food Network called Molto Mario. Every episode of the show was a cooking lesson and a history lesson from an epicurean perspective. I wholeheartedly subscribe to his philosophy on food and cooking. Buy local, buy organic, buy fresh, and buy/use/substitute seasonal ingredients whenever possible. I think one of the shows principals was to modestly introduce a whole culture of dishes to the American table that the typical American might otherwise shy away from. Once I realized that Italian food could be so much more than Pizza, Pasta, and Spumoni Ice Cream I became really interested in exploring foods not so customary to the American table. There is a romanticism in the way the dishes of Italy are composed, named, and presented. Mario does a good job of preserving the traditional aspects of Italian Cuisine and making it accessible to fervent home cooks, like me. I will credit Mario as at least part of the reason I got interested in cooking. I will go so far as to say that I think Mario Batali is to Italian Cuisine in America as Julia Child was to French Cuisine in America.

Pollo al Vin Cotto is Italian for "chicken in cooked wine". Cooked wine, because the wine is reduced to a sauce and then a glaze. The dish isn't one I would expect to find in the typical American home, but the flavors are not so far fetched as come off as peculiar. This is NOT a week night dinner, I made the mistake of thinking it could be. There is quite a bit of time involved in making this recipe. The original recipe from the book states that reducing the wine should take about 20 minutes. I knew that was way too short. I figured on 45 minutes, but it took about 80 minutes. I could have speed that up by using a wider saute pan instead of a sauce pan, and next time I will. I served this recipe with braised cabbage because as you may remember from my last post I have a wealth of cabbage left over from the Rebollita. I think the pairing was good, but I should have made polenta or orzo to go with it. None the less the chicken was incredible. 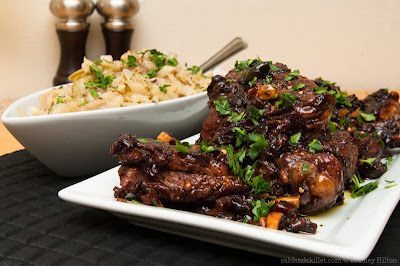 
Pollo al Vin Cotto (Chicken in Cooked Wine)
For the Vin Cotto (Cooked Wine)
In a wide sauce pan or saute pan combine wine, honey, cinnamon sticks, and cloves. Bring to a boil then reduce heat to a simmer. Stirring occasionally reduce the liquid to 1 1/4 cups. This takes a substantial amount of time, about 60 - 90 minutes. You can do this ahead of time or use the time for to prepare your mies en plas. Once the liquid is reduced transfer to a container (preferably glass or stainless steel) and set aside.

For the Pollo (Chicken)
Cut the leg quarters and breasts off of the chicken (you can have the butcher do this, but you should really learn how yourself). Reserve the carcass and wings for another use. Cut the legs and thighs at the joint and cut each breast in half for a total of 8 pieces leaving the skin on. Pat the chicken dry and season both sides with salt and freshly ground black pepper.
Heat a saute pan or wide pot over medium high heat. When the pan is hot add the olive oil. Brown both sides of the chicken starting with the skin side down, about 4 - 5 minutes per side. Work in batches to avoid over crowding the pan. Remove browned chicken and set aside.
Add more olive oil to the pan if necessary. Reduce heat to medium and add the onion and carrot. Saute until the onion browns and caramelizes. Add the olives, raisins, capers, pine nuts, and almonds. Saute for 1 minute more. Add 2/3 cup of vin cotto and bring to a simmer. Return the chicken to the pan and turn in the sauce a few times. Cover pan with lid and simmer for 25 minutes turning the chicken about every 7 minutes. Remove lid and set chicken aside. Add the remaining vin cotto and bring back to a boil then reduce heat to a simmer.
Meanwhile dissolve the sugar in the red wine vinegar. Add the vinegar to the pan. When the liquid in the pan has reduced by half add the chicken back to the pan. Continue simmering uncovered turning the chicken often until the sauce reduces to a glaze.
Place the chicken on a plate. Sprinkle with cracked pepper, red pepper flakes, and parsley and drizzle with olive oil.

Braised Cabbage
Heat a large saute pan or pot over medium heat. Add the olive oil, onion, fennel, cumin, and pepper. Saute until the onion becomes softened, about 4 - 5 minutes. Add the cabbage and stir to distribute the onion and spices throughout. Saute for about 3 minutes until the cabbage begins to soften. Meanwhile, in a small bowl, dissolve the sugar in the vinegar then add to the pot. Cover the pan and turn the heat down to medium low. Braise the cabbage for 20 - 25 minutes stirring occasionally.
Serve with more fresh ground pepper and a sprinkle of red pepper flakes.

Posted by Bradley Hilton at 8:52 AM