What I'm about to share goes against most of what I've read about making artisan pizzas. I'm becoming a really big fan of Jim Lahey and his simple bread dough methods. Several months ago I did a post (two actually) on Jim's no-knead bread recipe. The recipe blew my mind the first time I tried it and turned out a loaf that was every bit as good as the loaves from artisan bakeries. The recipe came from My Bread: The Revolutionary No-Work, No-Knead Method by Jim Lahey. The book is proving to be an invaluable resource for bread related recipes. Recently I tried his recipe for Walnut Raisin Bread which was incredible. There are several more I still plan to try. I've been making fresh bread about 4 times a month with consistently delightful results since that first loaf.

A friend of mine wanted to come over and make Pizza for dinner last night. She suggested, since it was already 4:00 PM, that maybe we should buy a pre-made dough from Trader Joe's. I'm all for making delicious food simple and accessible, so that was not a bad suggestion. But, I remembered that Jim Lahey had a pretty interesting looking recipe for pizza and it didn't require a lot of time or work. I looked up the recipe and in less than 10 minutes I had assembled the dough. Two hours more would be required for the first rise and 30 minutes for the second rise. This would put the cooking time at 6:45 PM. Perfect!

What's the secret to homemade artisan style pizza? You don't need a pizza stone, balance and quality of ingredients, and Jim's dough recipe. We made two pizzas. The first a Pizza Funghi (mushroom pizza), the recipe for which basically came from Jim's book substituting shallots for yellow onion. The second pizza was what I'm calling Pizza Trifecta which is a three topping variation of the classic pizza margarita topped* with arugula.

We agreed that these pizzas exceeded our wildest expectations and were better than some wood oven pizzas we've had. It really was artisan pizza at home!

Notes:  I'm really sorry for the big greasy smudge I put on the camera lens. You may notice the top left of these photos are blurry. This is why you should wash your hands and avoid touching the lens when using a camera while cooking.
Jim has a new book called My Pizza: The easy No-Knead Way to Make Spectacular Pizza at Home. The book won't be released until March 20, 2012. I'm interested to see what he has to say that he didn't include in "My Bread".

*I didn't have basil, so I substituted arugula which isn't traditional on Pizza Margarita, but it worked out nicely. I've written this recipe using basil as I intend to do in the future.


Basic Pizza Dough
Measure the dry ingredients into a large bowl. Mix the ingredients to evenly distribute them. Pour in the water and mix the dough with your hands or a spoon until it forms a fairly sticky ball, about 1 minute. If the ball is dry and has unabsorbed flour add 5g water at a time and mix until the dough is slightly sticky to the touch. Cover the bowl with plastic wrap and let it rise for at least 2 hours in a warm place (70º-75º F is ideal).
After the dough has doubled in size punch it down and turn out onto a floured surface and fold over a few times. Kneading for no more than 8 turns. Divide the dough in half and form two balls. Place on a plate and loosely cover with plastic wrap or damp towel. Allow the dough to rise for 30 minutes more.
Preheat oven to 500º F
Stretch half the dough (one ball or half the dough recipe) out to the edges of a 13" x 18" jelly roll pan oiled with about 1 1/2 tablespoons olive oil. Make the dough as thin and uniform in thickness as possible. No crust edge is necessary.
Add toppings all the way to the edge and bake for 15 - 25 minutes depending on the toppings.

Makes 1 pizza
Preheat oven to 500º F.
Stretch the dough out to the edges of a 13 x 18 jelly roll pan oiled with about 1 1/2 tablespoons olive oil. Make the dough as thin and uniform in thickness as possible. No crust edge is necessary.
Toss together the mushrooms and shallots in a bowl. Spread the mixture over the dough evenly all the way to the edges. Sprinkle with thyme, salt, and pepper. Drizzle with olive oil.
Bake for 20 - 25 minutes. Remove from oven and cut immediately. Drizzle with a little more olive oil and sprinkle with salt to taste. 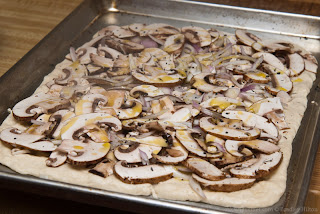 Pizza Trifecta
Preheat oven to 500º F.
Break up the sausage and brown in a pan over medium heat, about 7 - 8 minutes. Remove from pan and set aside.

Stretch the dough out to the edges of a 13 x 18 jelly roll pan oiled with about 1 1/2 tablespoons olive oil. Make the dough as thin and uniform in thickness as possible. No crust edge is necessary.
Spread the tomato sauce in a very thin even layer all over the dough all the way out the the edges. Lay the basil leaves out over 2/3 of the pizza. Lay the mozzarella evenly spaced over the entire pizza. Sprinkle the sausage over 2/3 of the pizza opposite from the basil, so the sausage overlaps with 1/3 of the basil in the center.
Bake for 15 - 20 minutes. Remove from oven and cut down the center along the long direction and in thirds in the short direction so you end up with 6 pieces. Drizzle with a little more olive oil and top with arugula if desired. Serve immediately. 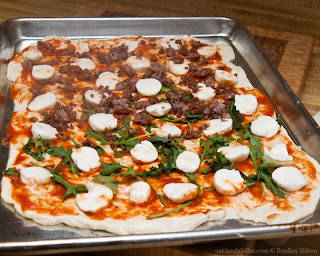