Back in the summer of 2007 I had an incredible opportunity to visit my Mom while she was living in the Philippines. She was teaching at Foundation University in Dumaguete City, Province of Negros Oriental, Philippines. You might not think of the Philippines as a culinary destination, but the culture certainly has its share of treasures. Probably the most celebrated dish would be Lechon, which is a whole roasted pig. I was lucky enough to be served Lechon on three occasions during my five week visit. Lechon is usually made for very special occasions. Judging by what part of the pig goes first it is prized for its crispy skin. I am a particularly big fan of the ribs since they are so close to the herbs the pig is stuffed with. Almost as popular and much more ubiquitous is Pork Adobo. Pork is quite a popular meat, in fact there is pork in almost every dish, even Chicken Adobo and often sauteed vegetables. One of my friends from Dumaguete told me that it is easier to tell your parents that you are gay than to tell them you are a vegetarian!

I was recently contacted, through this blog, by one of my mom's dear friends in the Philippines. This got me thinking about the food again. I remember being served so many amazing foods during my stay and they made such an impression on me (really the whole country did). I started to search for some of these recipes and found a few foodie bloggers from the Philippines. I've found several great blogs, my favorite is Pinoy Recipe; it totally reminds me of how English is spoken there. Also worth mentioning are Panlasang Pinoy and Filipino Recipes.

One dish that made an especially big impression on me was Crispy Pata. I remember going out to dinner with the Pal family during my first week in the Philippines. Sir Pal asked me if I liked Crispy Pata. I told him I didn't even know what it was and asked about it. He explained it as it really is: A deep fried pork leg. That was all the description I needed, so we ordered the Crispy Pata as an appetizer! Ever since then I've been wanting to make it for my friends (I have more planned so stay tuned).
Last week I went to my favorite butcher shop, Star Meats, I've known the owners and several of the employees for years now. Joe, the owner, brought me to the walk-in cooler to show me his whole pig. It was meant to be, I put my order in right then and there. "Joe, how much for all four of those pork legs?" It was a steal! 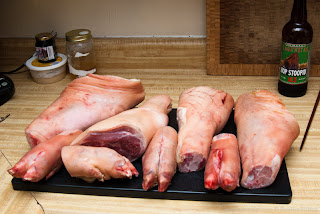 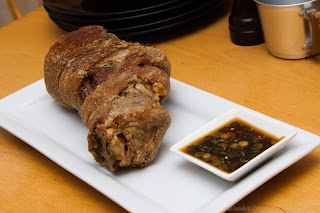 Clean the pork leg and remove any hairs left on the leg. Using a sharp knife make several 2 inch slits in the skin about 1/4 inch into the meat all around the pata. In a pot large enough to hold the pork leg completely submerged, combine the water, salt, pepper corns, bay leaves, and star anise. Bring the pot to a boil. Add the pata and boil until the skin is softened and the meat is tender, between 1 - 3 hours (see notes). When the meat is tender remove the leg and place in a bowl to drain. Pat the leg dry and allow it to cool before frying. You can do this the night before and refrigerate the cooked leg.

Season the pata with salt, pepper, and garlic powder. Fill a 6 - 8 quart pot large enough to fit the whole leg just over half way full with peanut oil. Heat the oil to 365º F. When the oil is hot carefully place the leg in the pot and place a heavy lid over the pot, askew, so that it can vent. You must place something over the pot because hot oil will splash up while the leg fries and this can be quite dangerous. Try to maintain the oil temperature between 350º F and 375º F. When the side of the leg in the oil has become golden brown turn the leg over and fry the other side. It should take between 10 and 15 minutes per side.

To make the sauce combine the vinegar, soy sauce, scallions, chilli, and sugar. Heat in the microwave or in a pan until hot, but not boiling. Heating will allow the favors to blend.

Serve the pata with the sauce to dip the meat in.

Notes: This was a good first attempt (I have one leg left). Most people who tried it liked it. Most of the information I found for making Crispy Pata said to boil the leg between 60 and 90 minutes. I boiled it for about 75 minutes. I really should have gone with my intuition and boiled it for longer. The meat was not as soft as I would have liked, but it was nice and crispy, just the way I remember it.
You should consult your doctor before attempting this recipe.

Posted by Bradley Hilton at 7:37 PM