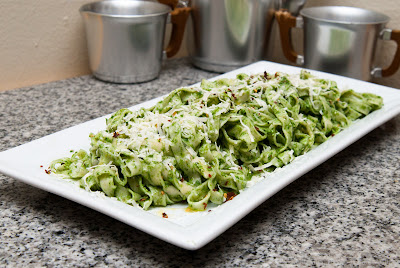 I've been having such a good time at the Grand Lake Farmers Market lately. I've never shopped at a farmers market so consistently. I've become a lot more adept at negotiating the stands and finding the best produce each has to offer. I am really, truly, starting to see for myself which fruits and vegetables are in season. I was so used to shopping the big grocery stores where things come from all over the world and everything is sold all year. I never really knew which things belonged together. Using fruits and vegetables that are in season has completely changed the way I feel about my food. Fruits and vegetables that ripen in the same season I now find naturally complementary. The farmers market has given me the opportunity to branch out, get creative, and appreciate where and who my food comes from. It would seem like an epiphany, but the chefs I revere have been saying this for years.

Last week I visited the Grand Lake Farmers Market and bought some of the usual things (for this time of year), carrots, chard, broccoli rabe, and oranges. I actually wasn't feeling inspired until I had already made most of my rounds. Then, on the Grand Ave. side, one of the tents was selling Stinging Nettle or Nettles. I've had contact with Stinging Nettle, as a boy, while playing near creeks in Tilden Park. If you are unfamiliar with Stinging Nettle, they have little hairs all over the leaves and stalk. The hairs are very fine and hollow. They penetrate skin quite easily and deliver a histamine that causes a stinging sensation and rash. Nettles are not to be touched!

I was recently at a party talking to strangers (also something from my childhood that I wasn't supposed to do, that I do now). They were telling me about forging for mushrooms in Tilden Park. One of them said she also collects nettles there. I had no idea that this plant was edible; I was very intrigued. She explained that blanching them would break down the chemicals in the plant that caused the stinging and that nettles are really quite good. Nettles have a bright green flavor similar to that of baby spinach. But, where to get them? I don't have a lot of time to go forage for nettles. I've never seen them in a grocery store.  There they were, ready to take me on my next culinary adventure. This is why I love the farmers market!

A recipe for Stinging Nettle Pesto and Home Made Fettuccine follows


Caution: Wear gloves and be careful not to touch the raw nettles with your bare skin. Keep the raw nettles off of your work surface too. Once they are blanched you can touch them as much as is appropriate to touch food.

Blanch the nettles in water at a soft boil for 3 minutes. Remove the nettles and submerge in an ice bath immediately. When the nettles are cool strain out the water. Give them a firm squeeze to get most of the water out.

Add the nettles, garlic,  parmigiano, and pine nuts to the work bowl of a food processor. Pulse a few times until the garlic is chopped. Scrape down the sides. Add half the olive oil. Turn on the food processor and drizzle in the remaining olive oil. Pulse a few times scraping down the sides. Add the lemon juice, salt, and pepper and pulse once more. Remove the pesto from the bowl and place in a container. Pour olive oil in the container to just cover the surface of the pesto. Place a piece of plastic wrap directly on top of the pesto and oil to prevent as little air as possible from coming into contact with the surface of the pesto and cover with a lid. Store in the refrigerator for up to 4 days. 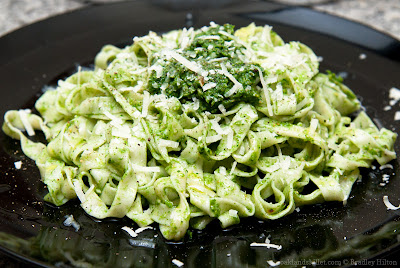 Make the pasta dough and roll in to noodles.

Bring 6 - 7 quarts of water to a rolling boil. Drop in the pasta and cook until cooked, but not soggy, about 2 - 3 minutes. Drain the pasta and place in a large bowl. Dress the pasta with the pesto tossing to coat. Serve immediately or at room temperature with a pinch of red pepper flakes, grated parmigiano, a dollop of pesto and a drizzle of olive oil.

Notes: Yes. The pesto is really that green. Blanching then shocking the nettles in ice water sets the beautiful color.

Enjoy!
Posted by Bradley Hilton at 7:35 AM