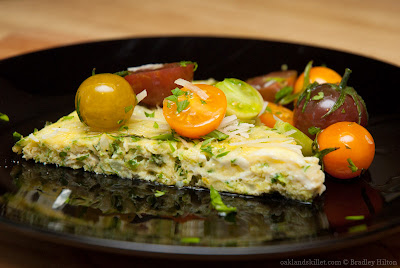 Zucchini is one of my favorite vegetables, maybe just behind chard. I think its versatility is what I like so much about this tender summer squash. My general rule of thumb with this vegetable is: the smaller the better. I love early summer when you can sometimes find baby zucchini. Baby zucchini are wonderful slightly browned in olive oil and tossed into pasta with basil and tomatoes for a light lunch. In South Africa zucchini are called marrows. When I was there visiting my sister I picked up a simple recipe for Marinated Baby Marrows which is essentially thinly sliced or julienned zucchini dressed with olive oil and lemon juice. Served cold, the salad is wonderfully refreshing on the hottest of summer days.

Late last June I got a chance to have brunch at a terrific restaurant in Oakland called Camino. One thing that makes Camino particularly special is that most of the food is cooked in a wood fired oven. The stand out that morning was the zucchini frittata. Typically when I've made a fritatta they have been rather thick, between 1 and 1 1/2 inches usually filled out with something like potatoes. The zucchini frittata served at Camino was served quite thin, perhaps 1/2 inch thick. Although I thought it unusual, this made a lot of sense. Zucchini contain a lot of moisture. If one were to make a deep frittata with lots of zucchini it would become a soup and probably never set. Also, wood fired ovens tend to be very hot and I would imagine that the top would scorch before the center was cooked. I was quite impressed by the simplicity of the Camino frittata and made note of it. Later in July I gave it a shot. My frittata turned out fantastic! My recipe may differ somewhat in its ingredients, and execution given that I don't yet have a wood fired oven, but I am none the less pleased with my take on Camino's Zucchini Frittata. I served mine over sliced heirloom tomatoes and grape tomatoes dressed with olive oil, but I would try it with arugula or spinach or even alongside roasted potatoes. As with most frittatas they can be served hot or at room temperature.

Grate zucchini on the fine side of a box grater. Place the grated zucchini in a fine mesh sieve and press out some of the liquid. If your zucchini are very fresh you may get 2 - 3 tablespoons of liquid. Discard the liquid (or drink it, mmm earthy!) Leave the zucchini in the strainer.

Crack the eggs into a mixing bowl, but do not beat them until just before adding to the pan.

Preheat a 10 inch cast iron (or non-stick) skillet over medium-low heat. Melt the butter. Add the garlic and shallots. Saute for 3 - 4 minutes until softened, but do not allow the shallots to brown. Add the zucchini and saute for 1 - 2 minutes until the zucchini begins to soften.

Beat the eggs with a whisk until they just start to foam.

Add the basil and parsley to the eggs.

Beat the eggs just slightly once more then add the eggs to the pan.

Remove the pan from heat.

Be sure that the ingredients in the pan are well distributed among the eggs.

Sprinkle the peccorino and pepper over the top of the eggs and place pan in the oven.

Bake for 10 - 15 minutes. Check to make sure the frittata is set before removing from the oven, but not completely solid. If you beat your eggs correctly the frittata should have puffed up a bit. Wait for the frittata to settle before cutting. Serve with a drizzle of olive oil and garnish with basil or parsley or whatever you like.


Notes: Prepare all the ingredients before starting to assemble the frittata. This frittata cooks very quickly especially if you are using a cast iron pan, which I recommend.

Posted by Bradley Hilton at 6:37 PM