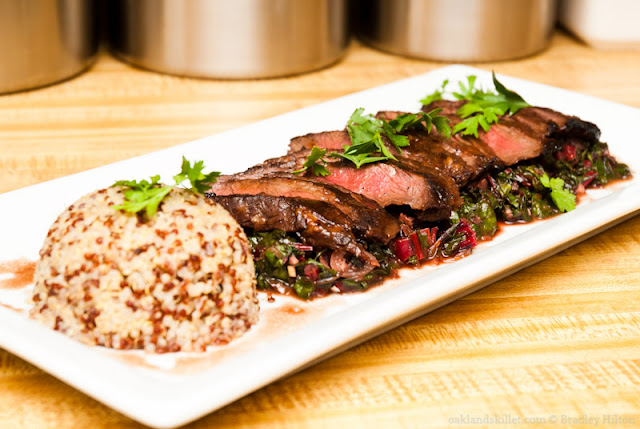 Recently I joined a book club. Last month I was given the chance to choose the book. I chose Heat: An Amateur's Adventures as Kitchen Slave, Line Cook, Pasta-Maker, and Apprentice to a Dante-Quoting Butcher in Tuscany by Bill Buford. Buford basically lived my fantasy midlife crisis, and wrote a book about it. He accounts his experience meeting Mario Batail at a dinner party, quitting his day job, going to work at Mario's three-star restaurant Babbo in New York City. After apprenticing at Babbo for a little over a year he journeys to Italy on a quest to learn traditional Italian cooking from Italians who have been passing down their family recipes for generations. I found the book thoroughly entertaining and very inspirational. Buford starts his journey wanting to know more about cooking, and along that route he comes to make much more profound realizations. In my own experience these cursory realizations often come when you aren't looking for them, and those realizations mean a great deal more. I came to a few of my own revelations while reading Buford's book.

The notion of moving to Italy and learning traditional Italian cooking is among my most idyllic fantasies. Buford's portrayal of how Italians approach cuisine is fascinating. In his research he finds that these traditions have not changed much over the last 500 years since the recipes were first recorded. He describes the food and cooking as being an integral part of the Italian identity. His account is pretty much how I have romanticized Italian culture. What I find so intriguing is how these traditions are passed down from generation to generation and carried out, not by chefs, but cooks. These cooks are grandmothers, fathers, mothers, sons, and daughters. Their understanding of regional cuisine seems to be socially ingrained and a source of identity and pride. Each of the cooks, for whom Buford apprentices, has a broad understanding of their region and heritage that is strongly bound to their culinary traditions. Each is truly a master of their craft, specializing in specific areas of these traditions: pasta, fish, meat, butchery, wine making, bread, and olive oil. What particularly strikes me is that each of these masters expresses their concern that the industrialization of food is threatening these traditions. Which, to them, means the loss of their cultural identity.

For some time now I have been thinking about my own philosophy on food. Something I strongly believe–resonated by the characters attitudes in Buford’s book–I believe food brings people together. I think about this from an evolutionary standpoint. Food is what kept humans together in herds, packs, or tribes tens of thousands of years ago, hunting and gathering and preparing shared meals. Gatherings centered around food are deeply symbolic and meaningful to most religions and cultures around the world today. The Last Supper, Passover Seder, and Thanksgiving to name a few. I ponder our traditions here in the United States. As a relatively new culture, composed almost entirely of immigrants originating from longer standing cultures, we too have culinary traditions much like those in the various regions of Italy. However, our traditions were largely brought with us and not developed out of what was plentiful in the areas we now live. This, I believe, has both positive and negative effects on the culture surrounding food in the United States. The demand for ingredients that are not native or require special applications to produce has given rise to industrial agriculture. Shipping this food around the country and in from other countries requires a tremendous amount of resources and has a considerable impact on the environment. This demand all but ensures the mass production of foods that are not fresh, preserved with unnatural ingredients, and missing the point of the original application.

On the upside we have this collective of culinary traditions, to draw on, to use in our own inspirations. We have the freedom to create from these traditions our own unique interpretations without the pressure to adhere strictly to the traditional ways. I once rejected the idea of Fusion Cuisine. The concept is often overemphasized, especially where that label is applied. I am certainly not advocating that we start putting soy sauce on tacos (although I believe there is probably a chef out there who is doing just that, and making it taste good.) And, understanding and preserving some of the traditional aspects of the originating culture is essential to shaping our own. We are in the beginning stages of our own culinary renaissance: New American Cuisine. Consideration for where our food comes from, how it is produced, and what is in it should be at the forefront of this movement. This is our opportunity to embrace the traditions of America’s cultural melting pot and integrate them into our own collective cultural identity.

How does Bill Buford's book tie into this recipe? While the inspiration for my post came long after I prepared the pictured dish, the answer is: very loosely. Buford mentions some of the sauces on hand in the Babbo kitchen. One piqued my interest immediately, a brown sauce made using a porcini reduction. He never explains how the sauce is made, so I searched the internet. One thing that many recipes on the internet, usually intended for home cooking, often lack is sauces. I find sauces to be a bit of a challenge due to my lack of experience with them. My search didn't turn up much except the idea to use the soaking liquid from dried Porcini mushrooms along with red wine and butter. I have used the soaking liquid from dried porcini in wild mushroom risotto. The soaking liquid has an extremely rich earthy flavor and aroma not at all uncharacteristic of mushrooms. So, the idea for the sauce came first. Then I began to think about what might go well with this sauce. Skirt steak. I had eaten skirt steak earlier in the month. I'd never cooked skirt steak before, but I've eaten plenty at restaurants. Skirt steak is not one of the most tender cuts, but it is probably my favorite in terms of flavor. The cut is used a lot in fajitas, but often overcooked. Marrinated, seared, and served rare to medium-rare is the best way to present this cut of beef.

Cut the skirt steak across the grain (short way) in to 6 - 8 inch long pieces. Pepper both sides of the meat. Dissolve honey in warm water. Add wine, porcini powder, salt, shallot, garlic, and vinegar. Mix well. Place the steak in a one gallon zip-top bag and pour in marinade. Remove as much air as possible. Refrigerate for 8 - 10 hours turning occasionally if possible.

Red Wine Porcini Reduction
Soak dried mushroom in warm water for 30 - 60 minutes. Drain mushrooms and reserve soaking liquid. Chop the mushrooms finely. Over medium heat melt butter in a 10 inch skillet. Add shallot and saute until softened and fragrant, about 4 minutes. Turn heat up to medium high. Add wine to the pan and bring to a boil and boil for 2 - 3 minutes. Add chopped porcini mushrooms, reserved soaking liquid, and vinegar. Return to a boil. Reduce by ⅔ stirring occasionally. Add salt to taste (don’t add salt until just before you remove the pan from the heat). Once the liquid is reduced pour through a strainer or cheesecloth and discard the solids.

Remove the steak from the refrigerator 1 hour before cooking to bring the steak up to room temperature. Heat a 12 inch cast iron skillet until very hot over medium high heat. Add 1 - 2 tablespoons oil. Place two strips of steak in pan (do not crowd pan). Sear on both sides, about 3 ½ minutes per side. Remove from pan, wrap in foil and allow to rest for 5 - 6 minutes before serving.

To serve steak slice across the grain of the meat (short way) at an angle. Place steak on a plate and spoon sauce over the top.

Notes: I served this over braised chard and quinoa. I added a bit of the steak marinade liquid to the pan while braising the chard. I added butter and salt to the quinoa before serving.
Posted by Bradley Hilton at 9:51 AM