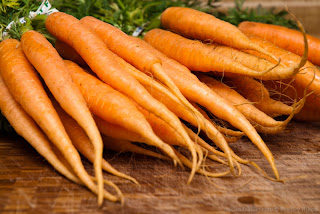 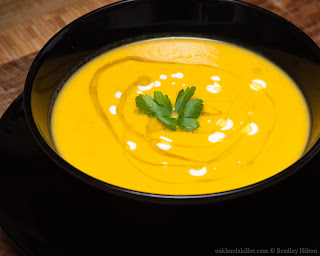 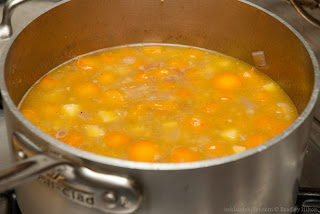 Heat stock to a simmer. Preheat a 4 quart saucepan. Melt butter over medium heat and add olive oil. Saute onions until quite soft but not brown, about 7-8 minutes. Add white pepper, ground ginger, cinnamon and 1 ½ ounces of the fresh ginger. Saute for 1 minute more. Add sweet potato, carrots and stock. Bring to a low boil then reduce heat and simmer for 20 minutes. Add honey and remaining fresh ginger. Continue to simmer until the carrots are soft, about 10 minutes more. Remove from heat. While hot use an immersion blender* to puree the carrots until very smooth. Blend in coconut milk. Add salt to taste. Cover and let stand for 5 minutes. Stir and serve with a drizzle of olive oil. 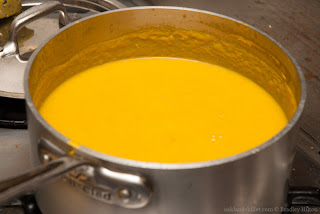 Notes: The ginger can be a bit tricky to balance. Depending on how strong your ginger is you may elect to add more or less. If a milder ginger, such as those available in Thai markets, is available do try and use it.
I have made this soup with both vegetable and chicken stock. Both add their own dimension of flavor and both are perfectly acceptable. However, I would only make this soup with a rich home made stock.
* If you do not have an immersion blender you can blend this in a blender, but it's hot, so be careful.
If you wish to make a vegan version of this soup use olive oil instead of butter and obviously use vegetable stock.
Posted by Bradley Hilton at 1:53 PM